Guillain-Barre Syndrome (GBS) is a Medical Emergency. It is a rare disorder in which the body’s immune system attacks ones nerves. Weakness and tingling in your extremities are usually the first symptoms. These sensations can quickly spread, eventually paralyzing the whole body. Guillain-Barre syndrome is a serious condition that requires immediate hospitalization because it can worsen rapidly.

In spite of round the clock care by team of doctors & the PICU team, the girl wasn’t responding well to the treatment. She was suspected to have rare variant of GBS where Serum GQ1b is present in high titres, which was confirmed from her serum. Due to high serum GQ1b antibody positivity, the condition deteriorated so much that she had been comatose for almost a week, needing mechanical ventilation during that period. She wasn’t responding to IV immunoglobulin (IVIg) and thus, a decision of performing Plasmapheresis (plasma exchange – PEX) was taken by the team of doctors to remove the antibody.

“Plasmapheresis (PEX) is an invasive procedure in which blood is taken out from the patient, the plasma is separated and rejected along with the culprit antibody and fresh plasma, collected from multiple healthy donors is being transfused to the patient. PEX involves intensive monitoring of a patient during and after the procedure particularly in a comatose child where detection of side effects and complication is challenging. This little girl went through 10 sessions of PEX. Later she was weaned off from ventilator and was discharged in a recovering phase. We hope that she will resume her school, play and other day to day activities very soon and can enjoy her childhood like other children”, said Dr. Sumantra Kr. Raut.

As per, Dr. Jeevan Silwal & Dr. Prince Parakh, “After multiple cycles of Plasmapheresis, the girl is now recovering really well. She is completely alert and interacting with everyone.  Weakness has been reduced to a significant level. With rehabilitation & physiotherapy she should be able recover further.  This wouldn’t have been possible without the help of advanced technology and expert team of doctors and nurses of Neotia Getwel who brought life back to the little girl and smile back on the faces of her parents”.

“Seeing your child getting paralysed in front of your eyes is the worst thing that could happen to any parents. When our daughter was comatose, we almost lost hope of getting her back. But with the help of advanced technology, proper diagnosis, round the clock care and team work, we got our daughter back smiling. We are thankful to her doctors and especially the to the entire PICU team who worked day & night to save our child”, said, Mr. Basak, father of the child. 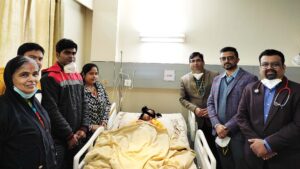 Neotia Getwel Healthcare Centre offers Painless normal delivery with labor analgesia (Epidural). Epidural is a technique where very dilute concentration of drug is used. This drug numbs the pain but maintains the ability to push your baby out through the birth passage. This involves the use of a needle and a very thin plastic tube. Drug to numb your pain is continuously given through this tube with the help of a machine. With an epidural, you do not have a higher chance of needing a Caesarean section. The aim of the epidural is to take away the pain of contractions. Usually, the epidural also takes away the pain completely when your baby is delivered.

We are committed to support women during the journey of motherhood by delivering best of personalized care to mother and child. Unique Features offered

Neotia Getwell Healthcare Center, Siliguri supports you in your journey of pregnancy making it a memorable experience to cherish forever. We make it possible by our integrated Antenatal programme conducted in our customized parent craft classes. The unit is committed to Deliver State -of-the art Mother and Child Care to expecting mother to maintain good health during pregnancy also educates the parents about pregnancy labour and child care and in particular provides a means of detecting problems with pregnancy at an early stage when the problems are more easily treatable. The antenatal class is the first of its kind in the entire north Bengal region .Pioneering many development in this area of healthcare we stay at the helm of initiative in the region.

Why is Antenatal care important?

Antenatal care is the name of the particular form of medical care given to a pregnant women and her baby starting from the time of conception up to the delivery of the baby. It includes regular monitoring of the women and her baby throughout pregnancy by various means including a variety of routine regular examinations and a number of simple tests of various kinds. The classes are offered from 13th week of pregnancy.